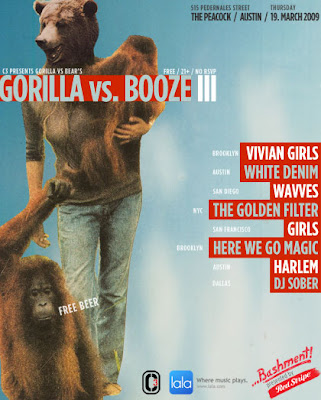 (enlarge image)
Ok. So maybe it's more like central Texas teardrops, but that's not a song. But yeah, your regular editors (Vince, Andrew, Matt) are not going to be at SXSW. We're over it, even if you may not be. We'll be in New York paying the bills at our day jobs. BUT, contributing writer Lauren Mooney will be there writing for Pop Rock Candy Mountain, and we are dispatching rogue writer and musician Tim Emmerick to the scene to see what Texas beer tastes like. Our guess is pretty fuckin' delicious.

Yes, there are hundreds of bands we'd like to see and lots of publicists we'd like to party with. But, we're not going to list all the bands or weep too much over our missed connections. Tim will be checking in with his musings from time-to-time, and we'll provide most of our updates that way. We just wanted to throw up the Gorilla vs. Bear showcase though because we think his line-up is pretty ace. He's got some of our favorite bands including Here We Go Magic, Harlem and new favorite Golden Filter (worth the price of admission alone even though it's free.) Go to the original post for set times and more great showcases. We'll throw up some more under the radar picks over the next few days including Crocodiles, Caitlin Rose and Ezra Furman. We'll see all of you back in NY after the fest anyway.

Dictated but not read by StarkNY at 1:53 PM

You may already know this, but the drummer for Here We Go Magic is actually from West Texas ;-)