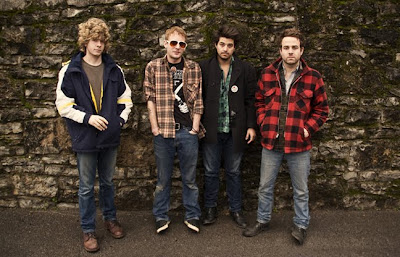 It's the goddamn Americana Traveling Willburys. Ok, while it's not Bob Dylan and George Harrison MG&V IS John McCauley - frontman of Deer Tick, Taylor Goldsmith - frontman of Dawes and Matt Vasquez - frontman of Delta Spirit. It's a three for three win -- featuring members of some of Stark's favorite bands. We don't have music yet, but we will soon. Here are the details from the PR.

As the project began to take shape, McCauley and Goldsmith decided Matt Vasquez was the man to complete their vision for the project. A few days after tape started rolling, Vasquez arrived in Nashville - never having met McCauley. The three songwriters immediately bonded and proceeded to make a timeless masterpiece. Dawes drummer Griffin Goldsmith also joined the group to contribute percussion.

MG&V will make their world debut at the Coda Agency SXSW Showcase at the Ale House on Friday, March 19th at 1 AM.

Album details will be released later in the year. Expect MG&V announcements at
http://twitter.com/MGandV

Dictated but not read by StarkNY at 8:31 AM