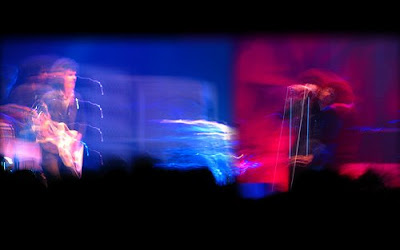 Last night at the Hammerstein Ballroom in New York, I got a pretty sweet taste of the psychedelic spacey-prog insanity that is the Mars Volta live. It was my first live Volta experience, and just like everyone said it would, it changed my perspective on the band. I’m never quite sure how I feel about these weirdos. On the one hand, I love that they’re blowing the skinny jeans and plaid right off of the hordes of “indie rock” and “experimental pop folk” bands that are quickly turning the music scene into an utter snooze fest. They’re so aggressively, deliciously polarizing that they take the snobbery right out of musical discourse: technically, it’s totally legit to either love them, or hate them. On the other hand, roughly half of the stuff they put out just flat out sounds bad. Still, the other half is pretty banging…

I don’t know all the names of the songs they played, other than it was mostly new album Bedlam in Goliath, with a smattering of the other three thrown in. I do know the amount of energy they brought to the show last night was obscene. They never stopped playing. I kept wondering, how do they prepare for these shows?
More after the jump...

Do they sleep for a week, and then conceal IVs filled with pure adrenaline under their clothing when they take to the stage? How are they not tired? How is the drummer still drumming? Packed in with hundreds of sweaty, quasi-maniacal fans, and being the height that I am (short), my experience was mostly auditory, but I did catch a few choice glimpses of Cedric Bixler-Zavala, clad in some sort of skin-tight shiny black shirt and rocking the same hairstyle as my 2nd grade teacher Mrs. Triolo, bouncing, salsa-dancing and microphone-tossing around stage. The arrangements were varied, interesting, and so overwhelmingly, refreshingly rock and roll that I couldn’t erase the smile from my face, even when some 6-foot tall douche bag saw nothing wrong with knocking me over and planting himself directly in front of me half way through the show. So what if the band believes in ghosts and Ouija boards and half the lyrics are totally ridiculous and make no sense? Viva la Volta.

Tara McCarthy—Stark contributing writer
Dictated but not read by StarkNY at 5:00 PM

the show last night was incredible - far and away best I've seen.

The blurry photo works for me :)

Poppa A! The photo was actually Matt's choice off of Flickr. Had I wanted to take a photo myself last night I would have needed a pair of stilts and a 40 foot zoom lens...

it's unfortunate that most of the young fans up front are assholes and ruined the show for longtime fans. if they payed attention to the show instead of moshing around like idiots, they would have experienced something amazing. so 80s. grow the fuck up.