David Byrne: Same As He Ever Was 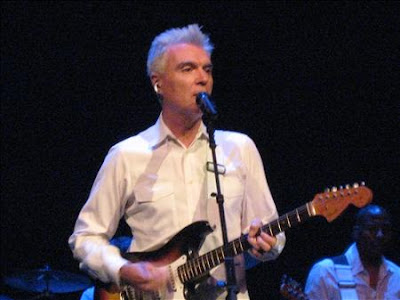 Photo credit - Pops Amoroso
It was a Tuesday night at the Zoellner Arts Center and one of the most ingenious and seminal new wave and world music innovators of the 70s to present was in town, opening a three-month tour. David Byrne, co-founder of the Talking Heads, songwriter, performer, published author, filmmaker, and actor, catered to nostalgia that evening, proving the art of live performance only matures with time.

Touring behind his recently self-released, Everything that Happens Will Happen Today (Aug.18, 2008,) Byrne found himself once again collaborating with longtime friend and producer Brian Eno on this album. Since the Talking Heads’ inception in 1976, Byrne and Eno joined forces on over seven different albums, including their latest.

Billed as, "The Songs of David Byrne and Brian Eno", audience members were timid about the show to come. The crowd of 50-somethings – mostly parents – eagerly awaited what they hoped would be an atavistic Byrne performance.

From the stage set up alone, it was evident that the old Byrne – the Byrne circa Stop Making Sense (1984) – may reveal himself. Situated stage left were three back-up vocal mics and a percussion unit equipped with congas, bongos, maracas, bells and chimes. Stage right consisted of a keyboard with laptop accessory, bass guitar and full drum set. Byrne, of course, took center stage...
More after the jump... 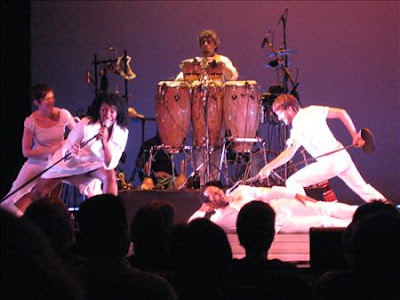 The sold out Zoellner Center prepared for the fantastic sensory onslaught to come.

With a few words from Zoellner Managing Director, Elizabeth Scofield and a dimming of the lights, Byrne sheepishly took the stage.

The performers, dressed in matching white attire, watched Byrne as he slowly fumbled with his guitar effects and addressed the crowd in an uncharacteristically awkward and reserved manner. Byrne seemed nervous as if he was asking himself if this tour, this performance, this new album, was going to work.

Opening with “Strange Overtones” from Everything that Will Happen, Byrne was clearly testing the waters making sure he still had his timing and signature dance moves (he did.) If there was any question about where the concert was going after the opener, they were quickly answered as Byrne & Co. romped into the Talking Heads classic “I Zimbra.” The show was clearly working.

Three dancers accompanied the band on stage engaging in a tightly choreographed avant-garde dance routine seemingly improvised, yet synchronized at the same time. The stage was aglow with orange and yellow lights projected upon a silkscreen backdrop, illuminating the performers as “I Zimbra” rollicked along. At this moment, it was clear that Byrne had locked into his highly refined, live concert genius.

The show continued with another new tune, “One Fine Day” and a more obscure track “Help Me Find Somebody” from My Life in the Bush of Ghosts. Oddly following the latter song, was a period of anticipation as an unprovoked tension began to mount amongst the crowd.

A period of silence followed, save for a few mistimed hollers from anxious audience members, as Byrne prepared the band and counted off, as he would consistently do throughout the concert. Dancers entered stage right parading around Byrne as he ripped into “Houses in Motion.” The luminous landscape of colors changed to mirror the song’s mood all while the performers shifted through one another. The crowd rose to its feet, serving as an anomalous song five standing ovation – one of four that would occur that evening.

The show provided an even mix of both the old and the new. Byrne did well to balance the set, pushing his new album, while pleasing those there for Talking Heads gems. “My Big Nurse,” “Home,” “The River,” “Life is Long” and “I Feel My Stuff” comprised the new album portion of the performance. Fan favorites, “My Big Hands (Fall Through the Cracks,)” “Heaven,” Crosseyed and Painless” (second standing ovation) “Once in a Lifetime” (third standing ovation) and “Life During Wartime” were more than well received.

Byrne always had another gear which resonated with his audience – reciprocation of energy drove the concert, getting fans out of their seats and into the aisles, singing lyrics and dancing.

For an evening that most didn’t want to end, Byrne did his best to prolong the show, treating the audience to two separate encore sets – the first included “Take Me to the River” and “The Great Curve” both of which were equipped with crowd sing-alongs. Choosing to end the concert with the title track “Everything that Happens Will Happen Today,” off his newest album, was no surprise to most – it was only fitting. Here, Byrne received his fourth and final standing ovation.

Byrne almost had fans forgetting why he was on tour: to push his new album. Spanning across generations, this is as close as most will ever come to seeing a Talking Heads show. Byrne proved he still has it, never lost it, and is the same as he ever was. 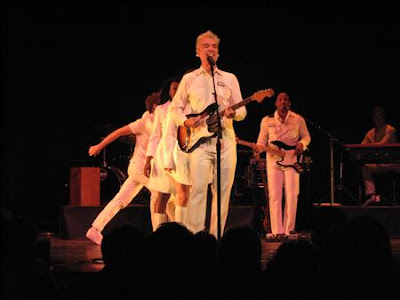 Dictated but not read by thestarkonline at 5:58 PM

Excellent review of an excellent show. This coming from a 50 + person attending the concert. Loved every minute of it.