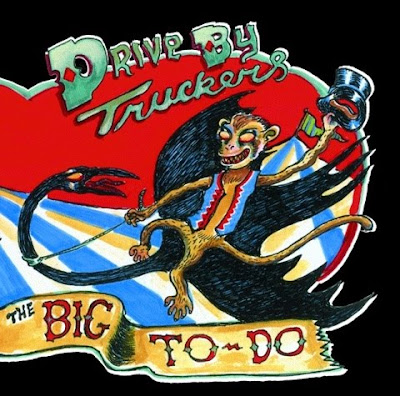 
Somewhere along the way, The Drive-By Truckers got indie cred. The best part about this, is that the band didn't really do anything. To their credit, indie tastemakers like Stereogum and Pitchfork will sometimes get behind artists, because, well, they make good music. Yet, The Truckers are a safe bet. They smoke on stage, pound whiskey, and their beer of choice is more often than not PBR. Yet, the difference between The Truckers and The Wild Yaks, is that DBT have been doing this since PBR was a redneck beer, not the go-to choice of thrifty hipsters.

But we digress. My band of the decade has a new record coming: The Big To-Do drops March 16th on their new home, ATO. Today, we get the first Mike Cooley-fronted single, "Birthday Boy."

After a few weeks with the record, what strikes us about it is not the melodies, or the return to a really hard rocking attack. What really stands out, is that The Big To-Do contains some of the best stories The Truckers have compiled since Decoration Day. From "Drag The Lake Charlie" to "Birthday Boy" to "The Wig He Made Her Wear" the lyrics and characters are as well developed and compelling as short novels. The subject matter remains the same: small town life, huge problems, domestic violence, drinking, prostitution, and murder. Yet, the manner in which these tales are spun is as direct and engaging as if Patterson Hood sat on your porch for a few hours and laid it all bare for you.

That being said: enjoy the two tracks above. More on the record and its content coming up.