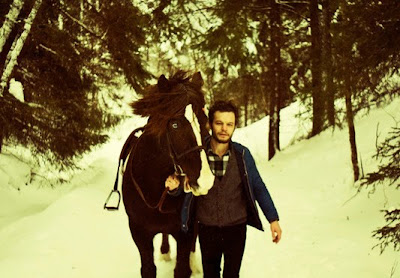 [mp3] Tallest Man on Earth: "King of Spain"
Weird. Amid the snow storm which attributed to a half day of work and one of the nicer commutes I have had in a few NYC months, "Burden of Tomorrow" off the Tallest Man on Earth's newest record, The Wild Hunt (due April 13 via Secretly Canadian) hit my speakers. Fuck run on sentences, we are Stark Online (maybe soon to be .net or .com?) Before we go off on that tangent, let's touch on our undying love for Kristian Matsson, a.k.a The Tallest Man on Earth.

His new record is full of buoyant, pop-sensible tunes, that showcase his amazing guitar talent while at the same time, mask it behind beautifully written strumming patterns; it's a procon (hybrid of PRO and CON). His lyrics continue to impress with endless nods to Dylan, Cohen and more. His vocals are unmatched -- he roars in tune like a musically trained, caged animal might. On the whole, the album is well-paced sounding at times, like a runaway train, and at others, like how one might imagine a vast, Midwestern landscape might sound; pitcture a Bob Ross painting singing to you. Done.

Insert tangent here: Yes. The rumors are true. MP3s may attribute to the deletion of your blog. Brooklyn shut-in's, vegans and Julie from "Julie and Julia" alike are running for the hills taking refuge behind Godaddy.com domains and other scary options; we've heard great things about WordPress, but can you transfer two and a half years of stark, snark, sweat and tears to Wordpress? Me thinks not.

Why we are here -- Tallest Man tour dates after the jump!

After the jump.
Dictated but not read by thestarkonline at 4:53 PM