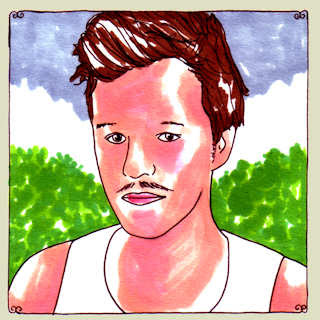 The Daytrotter Sessions have slowly become the indie-staple of the next step for certain artists, while for others, it serves as a time to strip down and hold your voice accountable -- Daytrotter reveals one's true colors, which makes it a great acoustic and musical benchmarking system. Some Stark favorites have graced the studio over the past week or two, all of which are worth mentioning here (in no particular order):

1) Tallest Man on Earth -- This is from way back, but talk about someone born to record at Daytrotter -- Kristian Matsson is an artistic enigma capable of crushing your soul, lifting you up, then making you stop to think about why your body still hurts. Truly one of the most uniquely genuine and inquisitive songwriters of the decade. Worth a good listen -- "I Want You (Dylan Cover)" and " I Won't Be Found (played on piano -- exquisite.)"

2)Or, the Whale -- San Francisco's answer to the wants of a fanbase that champions rainy days and ominous harmonies. Their self-titled '09 release came out on Sept. 19. Worth a good listen "Keep Me Up."

3)Carly Simon - Never Been Gone is her newest effort (dropped Oct. 27) which has met Luke warm reviews in the media, but we all know what she is famous for -- "You're So Vain" -- worth a good listen.

More after the jump.

4)Magnolia Electric Co. - Another band made to play this musical venue, which is probably why they recorded seven songs while there. Their newest release Josephine doesn't stray far from their linear, yet pristine song writing style which is why we love it. Worth a good listen - "Arrow in the Gale/Josephine."

5)Wavves- Really? OK. What you got kid? Well, yeah, it sounds like Wavves in a cave -- two songs is about right; let's keep it at that.

6) The Antlers -- their 2009 release Hospice is a front runner for top spots on many Best of List's this year. Worth a good listen "Two."
Dictated but not read by thestarkonline at 12:37 PM

Email ThisBlogThis!Share to TwitterShare to FacebookShare to Pinterest
Labels: Daytrotter, Magnolia Electric Co., Or the Whale, tallest man on earth, The Antlers, wavves