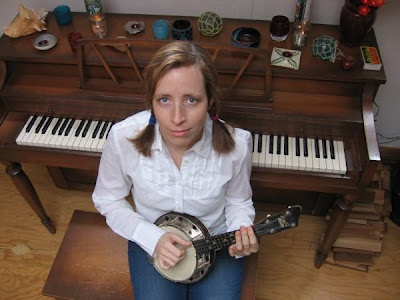 Laura Veirs: "Wide-Eyed, Legless"
Laura Veirs: "I Can See Your Tracks"
Laura Veirs: "July Flame"
So, here it is, the first January of 2010 release we're posting about. Oh, it seems like only yesterday that we were all brimming with excitement at the fact that the new Animal Collective record was on the horizon. Well, Laura Veirs is definitely not Animal Collective, but she is a strikingly consistent songwriter, who has quietly been plying her craft for going on 6 albums. Veirs has friends in the right places, or at least friends with great taste. She's appeared on a Decemberists' record, and is a favorite of A-list producer Tucker Martine (who produces, uh, The Decemberists.) Guests on Viers' new record July Flame include Karl Blau, Jim James, and Eyvind Kang - not too shabby. While excitement is high in our camp for this record, it is interesting to note that Laura Veirs has seemed to have parted with label Nonesuch for this release. July Flame comes out on her own label Raving Marching Band - where you can grab the above tracks for free.

Dictated but not read by StarkNY at 12:12 AM