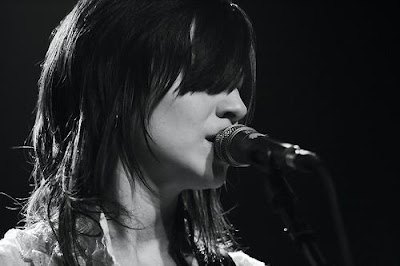 [mp3] Orenda Fink "That Certain-Something Spring"
While we don't agree with The Alternative Press that there is an Appalachian folk feel at play on the new Orenda Fink record "Ask The Night" that came out Tuesday on Saddle Creek, we do agree that the record is quite excellent. Often recalling a less atmospheric Jessica Ley Mayfield, Orenda Fink transverses the same echoing southern folk ground that has gained Mayfield such widespread praise. This is not to take anything away from Fink though. "Ask The Night" is a strong offering that has had us reaching for the iPod again and again to see who the hell it was that just played on the shuffle. That's a good sign. While there are some weaker tracks on the album, "Ask The Night" is absolutely worth picking up for those moments when Fink channels the glorious musical ghosts of a long gone southern past.

Dictated but not read by StarkNY at 10:54 PM