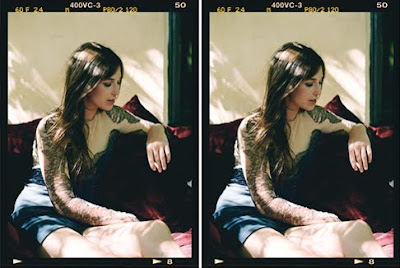 [mp3] Charlotte Gainsbourg "IRM"
Today, Charlotte Gainsbourg debuted a new mp3 "IRM" as a free download on her website. There has been a good deal of attention surrounding her new release (also titled IRM) as Beck wrote the music, guests on the record and produced and mixed it - much in the way Air collaborated with Gainsbourg on her last release 5:55. Of course, none of this would be possible without Gainsbourg whisperlike vocals and distinctly French flair. Gainsbourg has recently starred in several movies, but was severly injured and suffered a brain hemmorage after a water skiing accident. "IRM" is a reflection of her time spent getting MRI's during her time in the hospital. It's good to hear she's doing better. The album comes out in early 2010. She also released an album preview video. See it after the jump.
Photo: Autumn de Wilde


Dictated but not read by StarkNY at 7:21 AM