He Got New Yorkers to Dance: The Very Best 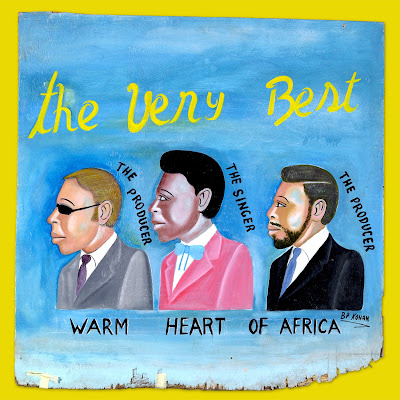 "They told me, 'people in New York don't dance.' People need to dance," Esau Mwamwaya said, speaking of his recent performance at Manhattan's Le Poisson Rouge. Dance they did, much to Mwamwaya's enjoyment.

Describing himself as a naturally happy and loving person, Mwamwaya reflects on the fact that most from his native Malawi in central African tend to be as well. "If we love one another and build strong relationships, then some of these things won't happen..." Mwamwaya said in regard to the social unrest and impoverishment of some in his homeland. "There are people out there suffering and they need to be loved."

Hear more from The Very Best including thoughts on the new track "Chalo," Ezra Koenig and a bit of heart break after the jump.

If you are curious as to how a central-African-born drummer became an underground hip-hop sensation, track back to London some years ago. Running a bicycle shop at the time, Mwamwaya crossed paths with Karlberg multiple times before striking up a conversation. "Johan [Karlberg] would cut through my shop, buy stuff...one day he asked if I was doing anything...I told him I was a drummer and he was happy to hear that," Mwamwaya remembers. Soon, Karlberg introduced Mwamwaya to Tron and his production studio giving birth to The Very Best. Sometime thereafter, the newly-formed trio realized the vocal abilities of Mwamwaya and recorded their first track together "Chalo" which is a keynote track on the groups newest record, Warm Heart of Africa, releasing this fall on Green Owl.

"Chalo" as described by Mwamwaya, is "a positive and negative song." "It is about war and starvation, but also about love," Mwamwaya said. Feeling that love is the only foundation that can keep people together, Mwamwaya trys to impart that feeling through his musical performances.

It was this loving life outlook that, after an introduction through Karlberg, initially drew Mwamwaya to Vampire Weekend's Koenig -- "we have a relationship that is more than just music...we hang together," Mwamwaya said. Koenig is featured on the title track of the upcoming Warm Heart of Africa release.

Another fantastic track from the new record is "Julia," a song sung in Mwamwaya's native language of Chichewa. It is assumed that domestic audiences don't understand the lyrics of most, if not all of The Very Best's tracks; therefore, it is interesting to note that even a joyous sounding song, can really be about heartbreak. "Julia" Mwamaway notes, is about "falling in love...you know love is so precious...like an egg, it is easy to break...you need to be careful and handle [gently]."

It is this passion for love, peace, harmony, songwriting, spreading of joy and general betterment of the world, that draws most to The Very Best. Though you may not understand the lyrics, this music makes you feel good about where you are, what you are doing and yeah, that fist that is pumping hard and high in the air.

Dictated but not read by thestarkonline at 10:18 AM