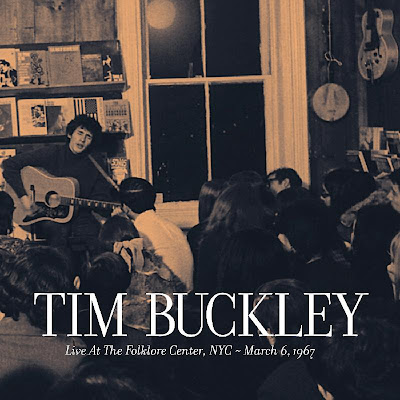 Anyone who studied Dylan's early career, or the history of Greenwich Village has become acutely aware of the venerable homes of folk music in the old New York. The Gaslight, Cafe Wha, The Folklore Center, and Gerdes 'Folk City, now frat bars or NYU classrooms, are a few that hosted young (or old) musicians on a regular basis. You also know that Dylan was one of many aspiring folk musicians, maybe not the best, and certainly not the most popular. Giants like Dave Van Ronk owned the scene which played host to other musicians such as Karen Dalton, Richie Havens, Odetta and, yes, Tim Buckley. Tim Buckley (yes 90s kids, father of Jeff) was one of the more shadowy figures on the scene. Known more for his later jazz-infused rock style (see his seminal work Starsailor) his folk beginnings aren't really where people turn. Admittedly, we're not Tim Buckley experts. That's why this Tompkins Square release Live at the Folklore Center has perked our interest so much. Recorded live in front of 35 people on March 6, 1967 by the equally giant Izzy Young, this album will hopefully (for us at least) shed some more light on this lesser known part of Buckley's catalog. Coming August 25 (Tompkins Square).

Dictated but not read by StarkNY at 1:29 PM