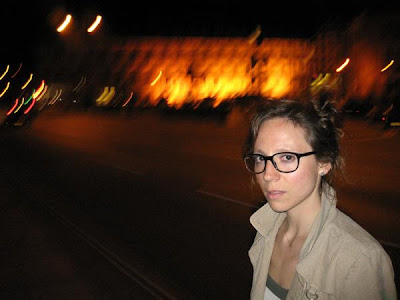 As the days wear on, one giving away to another, senses heighten, ears perk, and anticipation mounts as we are now on Showcase Countdown Day: 10.

In preparation for the Northside Festival, we at Stark are providing you with inside information, from the mouths of our billed artists, in attempt to acclimatize you to their playing styles, thought processes, and current musical pursuits. Our first subject: Jaymay.

We spoke with Jaymay (Jamie Kristine Seerman) on Tuesday at Smith & Mills in Tribeca; she's writing, reading, recording, and eager to release two new EPs. Continue reading after the jump.

We ordered drinks and a cheese plate. Us Starkians sat across from the modestly dressed Jaymay, whose reserved charm and artist quirks were endearingly satisfying. We wanted to know what she's been up to. So we asked.

Jaymay's 2007, Autumn Fallin' was released through EMI via Heavenly and Blue Note records. The debut put her on the radar, with songs highlighting her "infatuation with NYC and its change of seasons." And though she's still all about a hands on approach coming in the form of Protools, Garage Band and now DrumCore, Jaymay has set aside her nylon-strings, substituting steel and voltage; yes, she is going electric. Judas! (Dylan reference.) No way, not Jaymay.

Writing songs, reading poetry, and neglecting to listen to her iPod, which has only two artists on it --Van Morrison and Chet Baker (no joke)-- are day-to-day Jaymayian activities.

The conversation soon shifted to things we love.

Jaymay is a Letterman fan. She also loves the band Pela, "they're awesome" she said simply. She also loves when people hate certain sections of a band's live performance. Sure. Why not?

Minimal touring through Oregon, Philly and other US regions is keeping Jaymay busy when she's not writing, but there is no hiding her anticipation of releasing some new music. Stay tuned for the release of some new EPs.

We love that Jaymay is playing our showcase and hope you love that too. See you on June 13.

Dictated but not read by thestarkonline at 9:39 AM