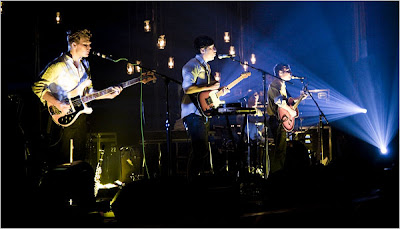 UPDATE: Thanks to a commenter who directed us to Nico Muhly's site where the frequent GB collaborator is moderating a pretty heated discussion on the merits of the NYT review.

It was Saturday night at Hi-Fi -- a day after the Grizzly Bear show at NY's Town Hall. We met a fellow cavort who also attended the show Friday. We asked what he thought. He, oh so predictably, blurted "it was the most amazing show" to which we replied, "actually, it wasn't." When pressed, he quickly amended his statement, concurring with our arguments as to the show's many flaws. Our theory is that, when pressed, about 5% of the audience actually wholeheartedly enjoyed the Grizzly Bear show, despite the effusive standing ovation and weekend of sold-out New York shows. We are the target demographic for Grizzly Bear: fans willing to go the distance for great music. After Friday, we won't be going the distance when it comes to traveling to any more Grizzly Bear shows. Read more of our take on Friday's show, and Ben Ratliff's spot-on review of the show in the New York Times after the jump.

There is no denying the talent of these musicians. They are all amazing vocalists and Ed Droste and Dan Rossen are pretty A-list songwriters as well. There were moments of beauty and excitement Friday night. [Correction] "Lullabye" was particularly lovely. Yet, the tension would build, and never fully release or resolve itself. Even the amazing "Two Weeks" hit fell flat. Most of the show was really boring, and heavily sleepy. Two or three on our row were dead sound asleep through most of the show. We nodded off a few times before the string section came out. The sound was muddy, and most of the nuances that succeed on their records were lost. Besides a joke about tweeting from the stage, the entire show was as serious as a funeral, stand-offish, and as Ben Ratliff writes, extremely "cold." We could go on at length here, and after some beer on Saturday night, we did. But, we'll leave it to the pros here. Ratliff perfectly summarizes the show in his piece for the Times. Read it, and enjoy his writing, because in all honesty, you probably didn't really enjoy the Grizzly Bear show that much.

Dictated but not read by StarkNY at 11:22 AM

That's what I heard! My roommate and his brother said almost exactly what you said. Almost word for word..

they didn't even play easier...

Honestly this is so clearly a reaction to their success. It's amusing to see people get excited about taking them down---it's the perfect article for people who have never liked the band by someone who never liked the band. And that's exactly how it reads. Personally, and pretty much everyone I spoke to loved the show to pieces. The lights, the set, the sound, the choir. If you don't like their type of music, don't go to their show, because they execute it masterfully

Typical backlash. They are better than 90 percent of artists making music these days.
-k

We saw the 5/29 Friday show... the NYT review is from Thursday night.

www.nicomuhly.com
explains why ratliff is an idiot

you can love a band and still criticize their live shows...all or nothing fans are lame.

As I said after the show: Grizzly Bear is music you appreciate, not enjoy. They're fantastic but boring.

Well put 2:01. Just cause you think a live show is boring doesnt mean youre creating backlash or hate the band.

The whole "fantastic but boring" sentiment that seems to be everywhere right now is extremely amusing because it simply exposes those who blindly jumped onto the Grizzly Bear bandwagon without truly liking their music in the first place. Those people are now jumping off in droves because, after all, backlash is also (always) en vogue.

For those who love their songs, and appreciate the music regardless of hype, the band's shows at Town Hall were simply mesmerizing. Their voices. Rossen's guitar playing. Their secret weapon, the drummer. The intricacies of the songs. All enthralling.

That "tension never fully released or resolved itself" for someone that readily admits to nodding off is...supposed to be surprising? For the real fans, the glorious crescendos in "Colorado" and "While You Wait For the Others" and the entire second half of "Ready, Able" did the trick in a big way.

And... they didn't play "Easier" on Thursday OR Friday night.

Liked it. Didn't love it. I understood what they were going for and didn't expect a rock show. I enjoyed it more than stark, but there were large periods of dullness. They are clearly not a song band, but more of an album band and that has to be respected. Yet, for the sake of a live performance they should consider playing the albums as a whole as an orchestra would, rather than the more "rock show" approach of playing a set-list type of show.