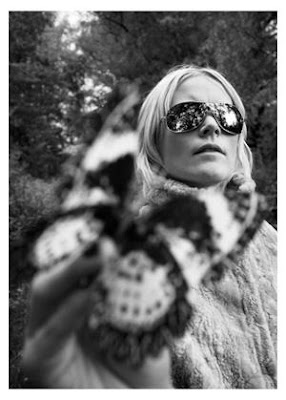 While out of the limelight for a second, Fever Ray (Karin Dreijer Andersson of The Knife) will be coming to the US to tour behind her amazing self-titled record. While the record is mostly a dark, moody and subdued affair, Fever Ray videos have proven quite engaging and creepy as hell. The show promises the same. It kicks off with 2 shows at Webster Hall in NY. Dates after the jump. From the PR:

Swedish multimedia artist Andreas Nilsson - who designed The Knife's live show and directed the video for her debut single "If I had A Heart"- is also the visual mastermind behind Fever Ray's live show. “The album has a mixture of acoustic and electronic sounds... something hard and visionary combined with something that is more organic. The live show should embrace that feeling."

"Andersson may keep her face hidden, but the ascetic intensity of her performance is such that her soul is bared… [She] pulls you inexorably into the darkness of her world," - UK Guardian.

Dictated but not read by StarkNY at 11:12 AM