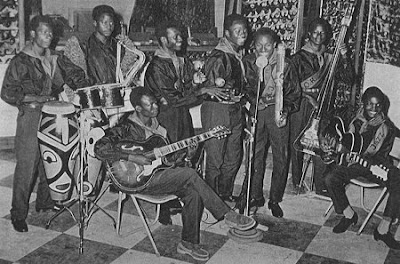 This is not the newest release (2008), but we wanted to share it with you on the first sunny morning in awhile. Aside from the excellent Underwater Peoples Records' compilation, this collection of Congolese artist Franco's music should be a staple of your summer listening. Francophonic amasses Franco's work from 1953-1980, with the earlier years featuring breezy African melodies in the form of shorter melodic, pop nuggets, while the later years find Franco and band stretching out the arrangements into longer forms, with more intricate instrumental sections. Despite the long period of time, the sound remains consistent, keeping within the buoyant Congolese rumba style and prominently featuring Franco's strong guitar playing and highly pleasing solo and group-based vocals. A long time front runner of this genre, Franco was only rivaled by our other favorite Tabu Ley Rocherau. Between the two kings of Congo (now Zaire), all of your summer cocktail parties should be more than covered in the music department. Thanks Cem.

Dictated but not read by StarkNY at 9:45 AM

this is really great! keep up the non-new non-hyped music posts - they are usually better.