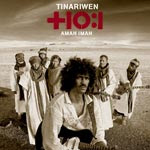 After discovering Tinariwen's 2007 release, Aman Iman: Water is Life, as suggested by the Hold Steady via the NYT celebrity playlist back when they were cool, we realized something: we were 26 years late. Tinariwen's influence is far-reaching, finding the likes of such renowned critics as Rolling Stone, All Music, Pitchfork, Uncut and more. Their African roots bring forth bold-rhythmic guitar lines and driving-choral vocals making their music simply original. We are elated to announce Tinariwen's return to the U.S. See tour dates after the jump.