SXSX - It's Over! Catching Up 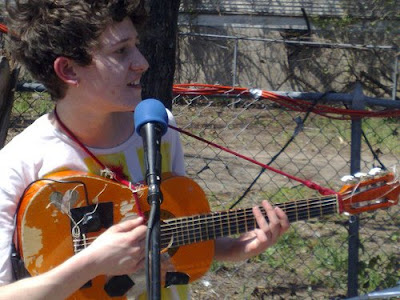 Safely back down to earth, I had another superior day of strollin', sippin' and listenin'. Here are some Day 3 highlights:

Micachu and The Shapes at the True Panther Party at Baby Acapulcos:
The next time you are with some jackass that drops a "more cowbell" comment, stop what you're doing and play them Micachu and The Shapes. Being a jackass, they'll probably hate it, but you'll love it. The diminutive (and slightly androgynous) Micachu only rocks Wal-Mart-style kids instruments. But she does rock them, producing not much more than scratchy percussion over the dancy drum beats and quirky synth pads. Think indie/folk/rock with a kick of Wavves-esque "I don't give a fuck" attitude. And at one point they had, like, five cowbells going.

Gomez and M. Ward at the Village Voice party at La Zona Rosa:

Gomez:
The boys from Sheffield got off to a bit of a rocky start (it seemed like sound issues,) but the songs quickly took over. They covered the gamut of their styles from tech'd out beats a la Liquid Skin, to three guitar rockers like "How We Operate." Highly recommended for those who have had it with The Hold Steady and need to fill the "older dudes who rock" void.

M. Ward:
I felt pretty much the same way about Matt's set that I feel about his records. It sounded to me like there was a band playing about three blocks down the street. I could hear the band and I really wanted to know what they are all about, but all I could hear were washy echos. The uber-delay on his vocal sounded neither vintage nor natural and buried his seemingly sharp lyrics. The reverb on his guitar wasn't much better. It bares noting that the rest of audience stood rapt, so maybe I'm the asshole here. But c'mon, you know me, that's NOT bloody likely.

Dictated but not read by StarkNY at 7:31 AM