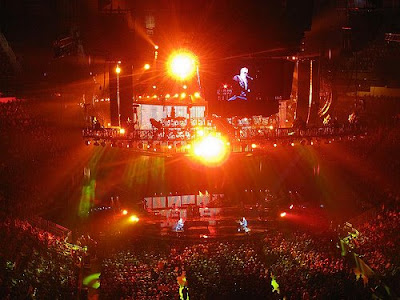 So in an unexpected twist, I ended up with 3rd row seats and VIPs for Elton John and Billy Joel at the Toyota Center in Houston. Needless to say, this was not originally on my list of shows for SX, but when fate says "thou shalt surrender to the Madman Across the Water" you kneel and bow. The contrast between this gig and anything at SXSW felt something like being plucked off the Coney Island boardwalk on the Fourth of July and being dropped into a holiday mixer at the Rainbow Room. The show was nostalgic and glorious. I also couldn't help but to feel a little sad that there wasn't an opener. I guess I should've known better, now that we live in Live Nation Nation, but it was just another reminder of the long-lost days when bands used to get "big." I remember seeing Radiohead open for REM on their Monster tour just before "Creep" broke. And Whiskeytown open for John Fogerty on his Premonition tour. Sure, the foundation of the "indie era" was already laid by then, but you think Radiohead and Ryan Adams didn't benefit from playing in front of all those Moms and Dads? Sir Elton and Billy put on an immense and thrilling show, it'll be sad to see gigs like that disappear.

Dictated but not read by StarkNY at 1:54 PM