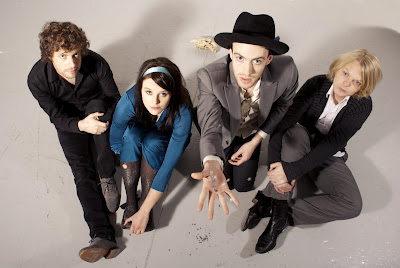 When: April 7, 2009
Label: Rough Trade
MP3: "Killed By The Boom"
Myspace
_________
The Veils have been on our radar since their underappreciated release of Nux Vomica in 2006. Three years later, highly charismatic frontman Finn Andrews and crew are set to release their third record, Sun Gangs. While tunes fron Nux such as "Calliope," "Not Yet" and "Pan" show a knack for devastatingly powerful rock-pop recordings (play "Killed By The Boom" now) this band thrives live. We caught The Veils at the Mercury Lounge in NY weeks after Nux's release and simply put, we were not drunk enough. Andrews' on-stage gyrations (see him laying prone on-stage straddling the microphone stand while extinguishing vocal chords) were intoxicating and not at all forced. We left sufficiently tight. There are high hopes from the Stark camp concerning Sun Gangs; we are currently spinning the record and hope to have a review up in due time. Until then, enjoy the MP3 above.

Hi there, could you please credit the photo to Nicole Kai Kobilansky and Ritchie Harvey please?