On The Blog Reel: Wednesday's Slew Of Videos 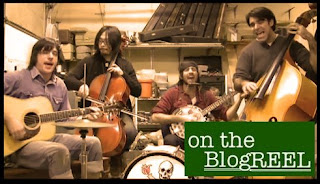 Bruce Springsteen is having a hell of a year so far, crotch slides and all, and it's only getting better. The Boss's official site has enlisted a heap of indie artists to contribute to "Hanging Out On E. Street," a series of video interviews and performances dedicated to Springsteen's songs. Our favorite so far is The Avett Brothers' stripped-down but jubilant take on "Glory Days." The Brothers took a break from recording their Columbia debut with Rick Rubin to participate in the project, which also features bands like The Gaslight Anthem, Teagan and Sara, Ted Leo and Valencia. Check out the performance after the jump.
Meanwhile, there are other great things going on in cyberspace this morning. Obi Best, who is fronted by Alex Lilly (backups on The Bird And The Bee's latest) brings us the dreamy video for "Green and White Stripes." It's directed by Max Goldblatt, who also did MGMT's "Boogie Down" clip. We've also got a showcase from Princeton, who first came on our radar last year. They shot a low-budget video on Super-8 film over the course of a winter weekend in LA for "The Waves," which has serious replay value. Lastly, check out some footage of North Carolina's Roman Candle performing new sessions at the Lake Fever Sessions, complete with a cute little kid talking about boogers in the beginning of the clip. We are so there.
All videos after the jump.
Obi Best "Green and White Stripes" Video from Social Science Recordings on Vimeo.


Roman Candle "Why Modern Radio Is A-OK" from Lake Fever Sessions on Vimeo.
Dictated but not read by Andrew Daniels at 11:14 AM