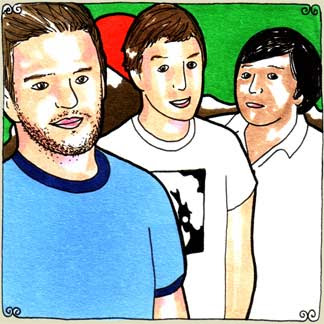 "Take Off Your Sunglasses" (via Daytrotter session #1)

Ezra Fruman's songs are made for Daytrotter sessions. Quick, frantic, and often feeling dashed-off, Furman's tunes pack a mighty lyrical punch in compact accessible nuggets of melody. Put Furman anywhere with a guitar and he can produce or re-produce songs on the spot. So goes the story with his (arguably best) song "Take Off Your Sunglasses." According to our interview, he penned that song on demand for a young lass in a college dorm. So Ezra, one of the most exciting new musician out of Chicago, and maybe the US, returns to Daytrotter for his second session. Backed by his trustworthy (if not the most amazing) Harpoons, Ezra offers up three unreleased tunes and one from his excellent sophomore record Inside the Human Body. While his debut Banging Down the Doors still contains his best material, the relentless Furman is a songwriter who can't slow down his creativity, nor should he. These are always the artists to watch as they continue to develop and push their personal and artistic boundaries.

Dictated but not read by StarkNY at 1:06 PM

Email ThisBlogThis!Share to TwitterShare to FacebookShare to Pinterest
Labels: Banging Down the Doors, Daytrotter, Ezra Furman, Inside the Human Body