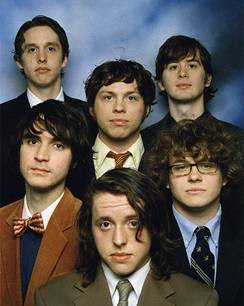 The Spinto Band: "Summer Grof" mp3
We know tomorrow is a Saturday and all, but you should probably be huddled in front of your computer screen if you happen to be home. Delaware's great white hopes, The Spinto Band, are playing the inaugural YouTube LIVE event at San Francisco’s Herbst Pavilion in Fort Mason Center. Part concert, part variety show and part party, this thing will probably be off the chain... or at least pretty cool for an Internet concert. And check out who's joining the indie band for the event: folks like Will.I.Am, Akon, Soulja Boy, Katy Perry and a whole lot of celebs ranging from famous to mildly-recognizable. (We think Spinto's inclusion on the bill is kind of strange, but hey, great for them.) The band released a fantastic record in October called Moonwink via Park The Van that you should check out this second. (Grab "Summer Grof" above.) The whole shebang starts at 8pm ET. It's totes free. And you'll have the best seat in the house: www.youtube.com/LIVE

Dictated but not read by Andrew Daniels at 5:27 PM