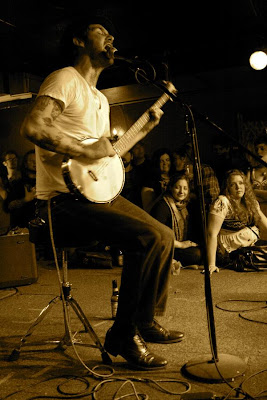 It's surprising that William Elliott Whitmore isn't more well known. He's a 30-something, tattooed, banjo-playing horse farmer that sounds like a 90-year-old man from the Appalachian Mountains. Part Tom Waits, part Roscoe Holcomb, Whitmore is able to straddle the line between the ancient and the modern, and the young and old. Ok, so maybe it's not surprising that he's isn't more well known, but we think he should be.

Either way, Whitmore's anonymity may be short lived as he just inked a deal with indie-titan Anti Records, who will release his new record Animals in the Dark on February 17. Below is a fantastic new track from that record, "Old Devils." Enjoy, and add him to your growing list of those to watch in '09.
Dictated but not read by StarkNY at 11:27 AM