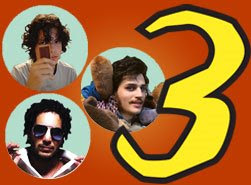 So for the first time since 1994, David Byrne's Luaka Bop label will hold a fall showcase in NY during CMJ. The occasion? Luaka's release of a creative new 3-inch series featuring three new (to us at least) artists named Yonlu, Marcio Local and Terror Pigeon Dance Revolt. From what we've heard HERE, every artist is worth checking out. The Luaka Bop showcase happens Friday, October 24 from 5-7 at Santos Party House. Terror Pigeon Dance Revolt will be playing and DJ Justin Carter will spin selections from the 3-inch records as well as Luaka Bop's amazing catalog. Definitely put this on your calendar. See below for descriptions of each artist from the Luaka press release. All 3" records are available now...

"THE TERROR PIGEON DANCE REVOLT
The Terror Pigeon Dance Revolt is a never- ending romp of a dance party; looped pianos and saxes race on top of crappy synths and ill beats, and like twenty vocal takes (seriously, like totally rivaling Broken Social Scene status) are mixed in there somewhere.

YONLU
Yonlu revealed just a fraction of his talent for experimentalism and a capacity to create delicate melancholy melodies before taking his own life at age 16, leaving behind works that are something between Badly Drawn Boy, Tortoise and Nick Drake.

MARCIO LOCAL
Marcio Local is a sexy samba beast and he has the hairy chest to prove it. His soulful style recalls Jorge Ben and his band is fully outfitted to rock with drums, guitar, bass, sax, trombone, trumpet and loads of percussion. The album was produced by Mario Caldato of Beastie Boys fame. "

Dictated but not read by StarkNY at 8:25 AM