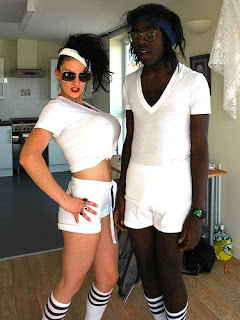 We came across this story as we were checking the morning's hot sheets. Devon Hynes a.k.a Lightspeed Champion claims via his blog, that Nicole "Biatch"/Scherzinger of the Pussycat Dolls, made reference to his good looks on "Grims show." Below is the story as reported by Blurt Online:
_____
"During a slow news day yesterday in England, reporters at the NME, trolling for something, anything to write about, discovered that indiepop pet rock Lightspeed Champion had been blogging about how there might be some "romance in [the] air for him and one of the Pussycat Dolls." Apparently Mr. Champion (that's Dev Hynes to Ma and Pa Champion) heard through the grapevine that the Dolls' resident diva-in-waiting, Nicole Scherzinger, saw a L.S. video and declared him to be "real hot."

Well, that does indeed sound like cupid has been bowing a few arrows, now, doesn't it! Of course, Scherzinger might also view a stove with a kettle boiling on the top and determine it to be "real hot" as well, so one must be very, very careful when affairs of the heart are mixed up with basic language semantics. Scherzinger is currently dating a Formula One racing champ, Lewis Hamilton."

Dev's blog post/Idolator side story continued after the jump.

"The dolls were on grims show... and there was a video question from you or some shit. Then after the video that nicole biatch asked who you were. So grim said and she said ‘he's real hot.'"

"A week or so ago i had to give a question for them to answer on the uk music show "Sounds" presented by Grimshaw and Annie Mac... needless to say, this was a good way to wake up.."

SIDE STORY: "Her Name Is Nicole" Exists, Sort Of
Dictated but not read by thestarkonline at 10:14 AM