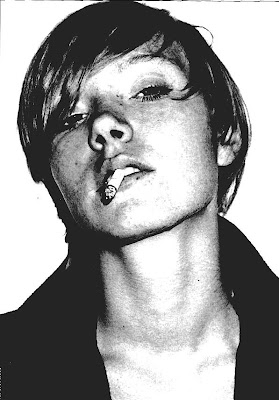 Lissy Trullie - "Self Taught Learner" - mp3
Well, admittedly we don't know all that much about Lissy Trullie. Except, from the few songs we've heard, she sounds like what downtown New York looks like, or used to look like at least. It's gritty, it has a certain swagger, it's a little dirty - yet, it has an attitude that attracts everyone from models (that look like Lissy) to skinny, leather-clad punks. I'm sure even the pink popped collar wearers that inhabit Ludlow street these days could find something to love in the well written Velvet's-esqe rock that Trullie plays. She is a magazine publisher's (and publicist's) dream, she also just happens to write some excellent songs to-boot. Lissy Trullie plays Cake Shop tonight at 11 with Jean on Jean and Apse. Also the Highline Ballroom on October 6th as part of the 3rd annual Gimmie Shelter Rock and Resuce benefit with Debbie Harry, Jesse Malin, Earl Greyhound and hosts Adrock and yes, Gina Gershon, (She's a musician people, come on. So what if her main instrument is the Jew's harp, it's thought to be the oldest instrument in the world!)
Dictated but not read by StarkNY at 4:06 PM