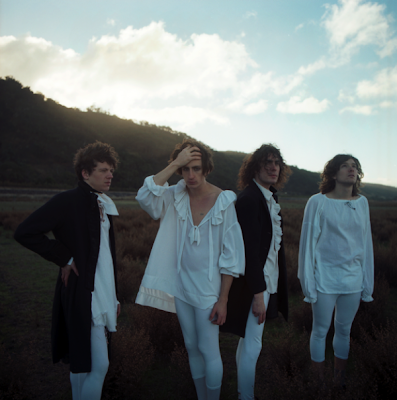 Mercy Arms' self-titled and self-released debut came out 8/16 worldwide. The Sydney, Australia band has a sound that suggests the early days of Creation records – all noisy, fuzzy and highly melodic. On first listen, I felt like I'd discovered a lost Ride album (love for Andy Bell? Anyone…). The record was produced by fellow Australian Tony Cohen; Tony has produced fellow Aussie's The Birthday Party, Nick Cave & the Bad Seeds, and the Dirty Three. Mercy Arms have toured in their native land with The Pixies, The Strokes, Cut Copy, and Editors. Not bad company. Definitely a band to keep an eye out for when they come stateside. There's a host of Cut Copy remixes available on iTunes and their entire album is streaming on their myspace.

Check out the video for "Half Right" - it has the look and feel of those early Jesus & Mary Chain videos.

-Mike Bailey Stark Contributing Writer
Dictated but not read by StarkNY at 3:24 PM