Are We Ready to Love Metallica Again? 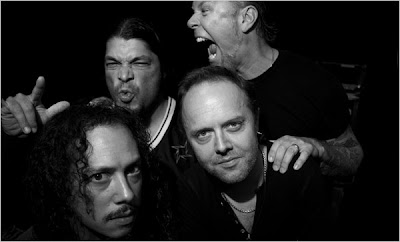 Listen to "The Day That Never Comes" metallica.com
For a few of us in the Stark family, Metallica played a huge role in the cultivation of our musical appreciation. We played in Metallica cover bands and rocked out during band practices until the police were eventually called. True story. Yet, for whatever reason, be it steadily decreasing quality output from the Hetfield/Ulrich/Hammett core, the allure of pop music that could actually score us chicks, or just generally growing older, our love for Metallica faded. We would still throw on "Sanitarium" for a nostalgic throwback, but the energy and passion we once felt was gone. Our disillusionment became fully realized after watching the devastating "Some Kind of Monster" train-wreck of a documentary. Until now?

The prospect of buying the new Rick Rubin produced Metallica record Death Magnetic (9/12, Warner) had not occurred to me until reading Ben Ratliff's cover feature reported from Romania (way to go Ben) in Sunday's NYT. In it, the band seems revitalized, healthy and like they are finally making good music again. While it remains to be seen whether the songs will appeal to me after so long a break - one thing can be said for certain - I am finally looking forward to a Metallica record again.
Photo: Cristian Movila for The New York Times

Dictated but not read by StarkNY at 12:13 PM