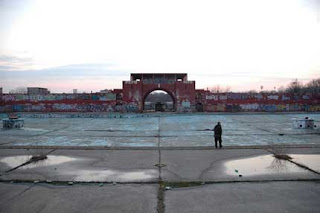 How the hell are we supposed to combat the doldrums of Sunday hangovers now? No more McCarren pool. Gone are the days where cutting edge musical stylings mingled amongst the indie elite -- where the who's who of eclectic Wayfarer-wearers came to establish fashion superiority and where drinking away Saturday night's debaucherous escapades was socially acceptable.
It seems only fitting that one of the most influential and seminal bands of the 80s, credited at times with creating the "indie-rock" genre, brought this musical wonderland to a close. Sonic Youth figuratively drained the pool after finishing their set Saturday night. Thurston Moore offered his cheeky sentiments, as reported by the New York Times: “Welcome to the end of McCarren pool as we know it... but next year we’ll all be swimming like little fish in this expanse,” Moore said.

Cliche emotional summations aside, McCarren pool was a great thing. Even if you weren't a fan of the musical act playing that day, the venue's slip 'n slide, dodge ball games, natural aesthetic -allure and people-watching-perches, were entertainment enough. McCarren, we will miss you and soon, we will swim in you.
Thanks.

After the jump.
Dictated but not read by thestarkonline at 11:31 AM