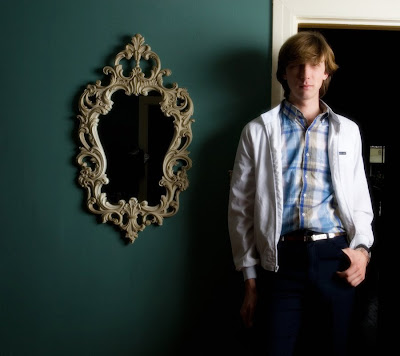 Jeremy Jay has the type of charisma that would make him a star regardless of what entertainment path he chose. It just so happens that he has a knack for singing and writing lonesome and wistful pop songs.

Live at the Mercury Lounge on Tuesday, Jay and his bandmates channeled the Talking Heads in ways not heard on their debut record, A Place Where we Could Go. The stage was all Jay's. Both the guitarist and bassist stood in the shadows to the side of the stage, while the drummer kept a low profile at center stage. This dynamic, much like the Talking Heads, makes the frontman's personality the centerpiece. Jay casually danced his way through songs from his new record and his previous EP, Airwalker. It looked as if he were dancing with an invisible partner, at times using the microphone stand as his inanimate stand-in. (See David Byrne with a lamp in Stop Making Sense).
Read more after the jump...

Musically, the band and vocal lines were charmingly sloppy. Well, pretty much everything about Jeremy Jay is charming. Missed notes and cracked vocals did little to hold back the feel and message of the songs — they only added to the band's endearing nature on stage. As Jay warmed up and gained confidence, his singing improved markedly. The most clear example of this came on his "single" "Airwalker" arguably Jay's best song. The musicians had a stronger attack, and Jay seemed to take more risks with his singing. The band played most songs with a punchy staccato reminiscent, again, of the Talking Heads. The picked bass lines and aggressively choppy drumming provided a nice contrast to Jay's smooth and languid vocals.

Overall, the show at Mercury featured a young star on the rise. Although from L.A., Jay seems to channel a distinctly European flair and is sure to attract fans from the Jens Lekman scene. As Jay grows and his songwriting develops, I have no doubt you will be seeing more and more of him. Yet, he may be one of those types content to work from the wings. That is until some future Wes Anderson finds a lost Jeremy Jay single and posthumously transforms him into the star he may have once been.

Dictated but not read by StarkNY at 7:31 AM