I Shall Be Released: Noah and the Whale 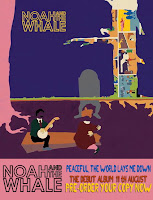 Keep a keen eye out for these London-based indie pop-rocks. Their newest album, Peaceful, the World Lays Me Down is set to release in the U.S. Aug. 4 on Young & Lost Club/Cherry. For now, get your fix via Myspace or dare we say pay for (iTunes who else) their quirky, super-catchy single "5 Years Time." Frontman Charlie Fink joins forces with Stark favorite Laura Marling to produce a feature track worthy of Jenny Lewis, Feist and She & Him comparisons. Noah is billed to play Lollapalooza on Aug.1, which is one of their only U.S. dates in the near future. Check back soon for a full album review.


After the jump.
Dictated but not read by thestarkonline at 3:32 PM