Saw this little nugget of fascism on ABC news. File this in the WTF category. 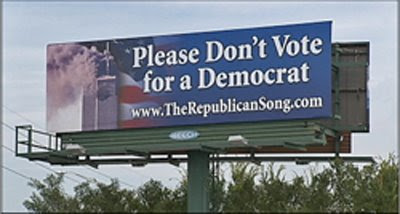 "It should be taken down," William Carter, who lives near one of the three billboards, told ABCNews.com. He said he believes that although it is entirely within Meehan's rights to express such an opinion, recalling a devastating time in our nation's history for personal gain "is just wrong."

But Meehan said he is only selling the CDs to cover the cost of getting his message out.

"I'm holding the entire Democratic Party responsible for the attacks on 9/11," said Meehan, who wrote, sang, produced and recorded the song. He said people should not vote for Democrats because they are too focused on solving the problems in the economy when they should be focused on the war on terrorism."

Dictated but not read by StarkNY at 12:00 PM