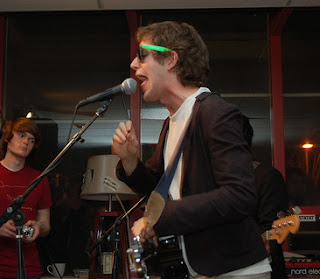 Just announced, Ezra Furman will use the resources of Ebay.com to auction off the rights to your very own, personalized song. So go forth and bid. What would I want my song to be about? Let's make it tough for him: Ice Hockey, Monkeys, Heartbreak, Alcohol, Duck Boats, Sleeveless Shirts, Clue (the game,) Wing Nuts and taking off my sunglasses (ha!) Let's hear it Ezra. Minty Fresh recently released this statement:

"Starting July 4th, you'll have the opportunity to bid on a personalized song by EZRA FURMAN. You can have him write a song based on any subject that you want. It can be a song about YOU, your significant other, a love ballad, a satire about a desk: anything you want! ANYTHING! The sky is the limit. And with the critically acclaimed songwriting talent of Ezra Furman, you're sure to get something excitingly interesting.

The auction will last for ten days. Visit www.ebay.com/independentsday to bid on this unique item!

Ezra Furman and The Harpoons are putting the finishing touches on their new album currently titled INSIDE THE HUMAN BODY. The album is produced by Brian Deck (Iron & Wine, Margot & Nuclear So & So's, Modest Mouse) and will be out this Fall."

Dictated but not read by thestarkonline at 3:57 PM