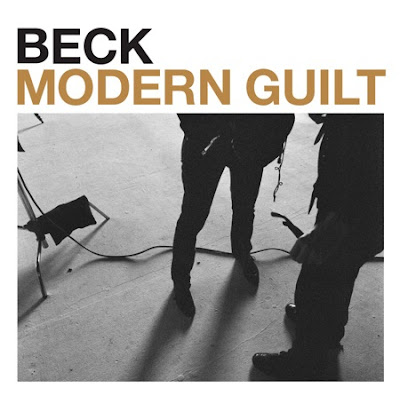 Upon first listen, Modern Guilt sounds like Beck's most cohesive and focused effort since Sea Change. Whereas Guero and even more so The Information sounded like hodgepodge albums of random tracks and musical genres. Modern Guilt feels like a singular vision, with songs written and conceived for this album alone.

Danger Mouse's production techniques are immediately felt. He gives songs a rounded-off gauzy sound, which differs from Beck's sometimes rough-cut yet crisp offerings on previous albums. Modern Guilt has an obvious analog/vintage-rock sound most notable in the distorted drum tracks that sound very similar to the soul-influenced beats found on Gnarls Barkley records.

Another departure from previous Beck records is the lack of additional percussion. Guero and The Information were filled with shakers, maracas, wood blocks and (black) tambourines. These instruments are replaced with electronic sounds that fill the same voids, but again give the album a softer and darker feel. Similar to the previous Beck records, behind vocal lines and percussion lies a myriad of sounds and layers that unveil themselves only upon repeat listens.

So far, standout tracks include "Orphans", "Gamma Ray," (Beck always front loads) "Youthless" and "Walls." Already, Modern Guilt feels more rewarding than The Information and promises to stay in heavy rotation for some time to come. Bottom line, Beck refuses to stay stagnant. He always pushes himself and his fans into new directions -- thankfully, those directions are almost always excellent ones.
Dictated but not read by StarkNY at 8:24 AM

great, great album. you're right, definitely the most cohesive since sea change.