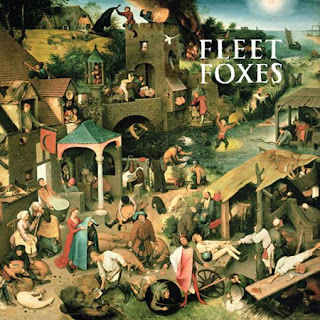 Today, it has become increasingly rare to have all of the disparate opinions of music critics line up behind one artist or band. In most cases, that band is new, and proceeds to have a very big year. I give you Fleet Foxes.

This Seattle band's press file includes raves from Rolling Stone, Pitchfork, Blender and Fader. The list is seemingly endless. The blog world embraced them early, and more mainstream critics quickly followed suit as well. Fleet Foxes released an excellent EP earlier in the year which caught the attention of a very inviting critical pool. Subsequent tours followed, as buzz grew leading up to their LP-release-day last week. They landed the highly sought after 9.0 from Pitchfork, and sold 8,000 records in their first week. Sub Pop has found the formula for breaking new bands and Fleet Foxes are reaping the benefits.
MORE AFTER THE JUMP.

The first and most important step is, clearly, to make an excellent record. Fleet Foxes have. Their eponymous debut often lives in several worlds at once. At times it sounds like a distinctively modern "indie" rock album, with its reverb-drenched vocals and haunting Grizzly Bear harmonies. Yet, what makes this album so fantastic, is its ability to draw from old sounds and styles, as well as new. Not just old as in the '60s-influenced baroque pop their sound echos, but old as in dusty Alan Lomax field recordings. Yeah. That kind of old. There's an ancient aura at play throughout the record, drawing from rural America and medieval sounding instrumental lines. Somehow Fleet Foxes mix the country with the city, the old with the new and create a potent and highly enjoyable record.

So what happens next? In the past, when the critical cosmos has aligned in such a way, it meant big things for that artist. Small "indie" rock artists have become household names: Feist, My Morning Jacket, Arcade Fire and Modest Mouse come to mind. Will Fleet Foxes be selling out Radio City Music Hall this year? No. The record lacks that one hit to land them the coveted iPod commercial or prominent TV placement. Ultimately though, they are not that kind of band. Fleet Foxes have made a complete album that, thankfully, is not a passing sweetness; it is long lasting and stays with you even after it's gone. In that way, listeners will keep coming back to Fleet Foxes, and in turn, the band will find ample amounts of success.
Dictated but not read by StarkNY at 2:20 PM