Nashville Review: The Tallest Man on Earth @ The Basement 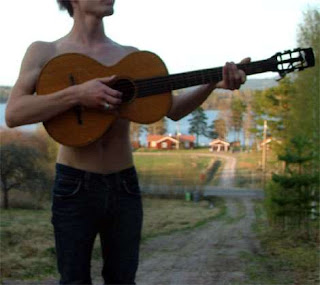 By Vince Amoroso
He was not the tallest man on earth, but rather a living irony. This cliché will soon become commonplace as this Swedish troubadour gains fame. Shallow Grave, the new album from Kristian Matsson, a.k.a. Tallest Man on Earth, received an 8.3 out of 10 on Pitchfork. For gaining hipster-indie-cred, Pitchfork’s rating system is tops.

“He was like a caged tiger on stage” one performer said alluding to Matsson’s set. Well, he was some sort of animal up there. (Hold back the Metallica puns, please.) Matsson’s performance centered on his stalking abilities - be it through long drawn out soul-ensnaring stares pinpointing certain audience members or his unpredictable pacing.

Matsson is small though. We are not joking about that. He sported tight jeans that made his legs seem transparent. Widely hailed as "Dylanesque", Matsson's lace-up leather boots exemplified the analogy (his rustic singing voice helps too.) With a hair quaff and a childishly contrived mustache, Matsson had our attention before he even sang. He worked the crowd in all possible ways.

The power of the Tallest Man’s voice humbled audience members. At any given point during his performance, one could observe hands on chins and elbows on knees, people seemingly in awe of this man. His guitar playing was utterly flawless – fingerpicking at its best.

Matsson was the whole package. He captured the emotions of his songs in facial expressions and through his stage presence, venturing into the crowd at times to dramatize everything that much more. Every breath and lyric sung was heartfelt and delivered in an unassuming, mature fashion.

Check your local listings. Tallest Man on Earth is definitely worth checking out.
Myspace

Continue on for a video.
After the jump.

saw him last night. He was amazing. I hope that he does well in the states. Very appalachian, very strange stage presence.