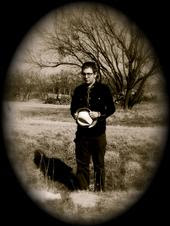 Micah P. Hinson caught my attention in 2006 with a terrific record entitled, Micah P. Hinson and the Opera Circuit. It’s full of dark, expanding ballads that underline Hinson's minor vocal tones. A little investigation into the artist revealed that Hinson already had the early Steve Earle lifestyle (drugs, jail, etc.) under his belt by the time he was 20 - A fair explanation for the characters in his music.

Those qualities are evident on this track "Tell Me it Ain't So" from his new album, Micah P Hinson and the Red Empire Orchestra. Hinson offers lyrical atonement as a small orchestra (piano, guitar, bass, organ and strings) waltzes on behind him. The music builds to a crescendo while the singer is left with only the repeated meditation, “Please God, Tell me it ain’t so, please tell me it ain’t so…”

It’s easy to make comparisons to Kurt Wagner and Lambchop, but Micah stands on his own with a more direct approach. Hopefully the new album follow suit.
Micah P. Hinson - "Tell Me it Ain't So" mp3

Dictated but not read by StarkNY at 4:13 PM