By Matt
Additional reporting by Ashley 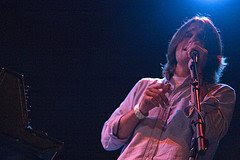 Ashley and I had a chance to sit down with Chicago dance/rock duo Walter Meego last Thursday before their set at the Bowery Ballroom opening for the Presets. What emerged from our conversation was a portrait of a new band striving to define themselves in an ever-changing musical landscape.

For Justin Sconza and Colin Yarck, New York was the end of a 15-date run, during which the band released their debut record Voyager on Almost Gold via Columbia/Sony. Calling New York more "lively" than their current home, LA, and former home Chicago, the two seemed glad to be back. In a year where the dance genre has made many new fans in the wake of groups like Justice and the reemergence of Kanye-fueled Daft Punk, Walter Meego seems to be striking while the iron is hot. Yet, when asked about the attention surrounding their debut release, Sconza was reluctant to credit the growing dance/rock market. “We’ve definitely been receiving more attention recently, but I can’t say it’s specifically because of [the marketplace]” 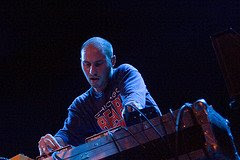 their genre. For Walter Meego though, their genre and band are not as easily defined as one may think. Yarck comments, “[In Europe] we play more parties – club nights. It’s fun, it’s a different type of show.” These types of shows, while fun, elicit some frustration from the duo, who want to move from being sort of party DJs to becoming more of a band that commands the attention of an audience. Understandably.

More with Walter Meego after the jump...
Their set that night at the Bowery clearly defined the split between the two ends of the musical spectrum. Yarck stood behind a full table of mixing equipment and other electronic pedals and knobs. He moved like a DJ at a club – singing along, and dancing. Juxtaposed to this was the rather reserved Sconza standing behind the microphone, playing the guitar and synthesizer taking the role of the classic rock “frontman.” The thick beats drove the tunes, and were the most compelling aspect of the set. Interspersed between the fantastically hooky verses and choruses were some confusing guitar solos. At one point during the song “Through a Keyhole,” Sconza and guest guitarist Andrew stood at the front of the stage and engaged in dueling guitar-tapping solos reminiscent of something out of the Metallica era.

Speaking with the band’s tour manager, Al Verik, he commented that while the tour with the Presets was a great opportunity Walter Meego is looking to move away from the dance crowd and capture more of the indie-rock crowd. Both Verik and Sconza commented on their fondness for label-mates MGMT and their desire to possibly tour with them in the future. MGMT seems to represent a band that has successfully captured the dance/rock sound and fan base that has come to the forefront in late 2007 and early 08.

More importantly, what has really driven the rising profile of Walter Meego has been their licensing opportunities. The hit show Ugly Betty featured two of Meego’s songs in their episodes. Most notably though, is an upcoming Heineken beer commercial prominently featuring the Meego single “Forever”. Verik commented that this could be a huge break for the duo.

Whatever the outcome, Walter Meego will hit the road again in August. The duo’s development is sure to be rapid, and any lingering questions about where they fit into the marketplace will be answered. Regardless of genre-tag, as long as Walter Meego continues to deliver melodic, richly produced-beats and choruses, fans will come.

Photo credit - Diana Wong
Dictated but not read by StarkNY at 1:30 PM