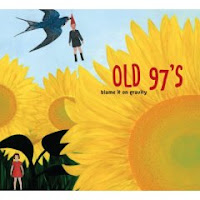 We haven't had one of these in awhile. Since 2004, to be exact. That year's release Drag it Up did little to quench the thirst we all have for this Texas band's blend of desert country rock and soaring pop hooks. So really, it's been since 2001's Satellite Rides since we have gotten a truly worthy Old 97s record. Widely hailed as a return to form and possibly one of the band's best yet, today's Blame it On Gravity (New West) is absolutely at the top of my Other Music shopping list.

Also on that list is the new Vetiver, Nick Cave's Murder Ballads, and possibly the Dosh record Wolves and Wishes. Until I get to digest Blame it on Gravity or post any tunes from the album, enjoy the video for the classic song "Over the Cliff" from Wreck Your Life. Yes, it's the album track overdubbed over live footage, but shit... who's got money for a real video?

AMAZON
Dictated but not read by StarkNY at 7:59 AM