How I Lost My Metal Virginity At Paganfest 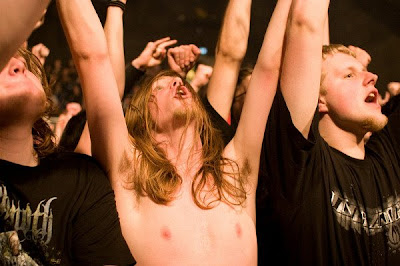 Concert Review by Ashley Herriman
As you may have noticed, I (Ashley) tend to take some creative license when blogging about music (revelation: it’s because I don’t know a lot about music). Today I offer something a little different for Stark readers: Paganfest USA, the final show of the U.S. tour at B.B. King Blues Club in Times Square.

I’ll skip the particulars of how I came to attend a metal show other than to say it was courtesy of a friend who has a predilection for this sort of music. Paganfest was deemed appropriate for me because the line up falls into the category of Folk Metal and it was expected to be on the tame side despite being billed as “the most heathen metal-tour in 2008.” In keeping with this, there were many elaborate costumes – my favorite being a 40ish man in a kilt with bleached blond hair who inserted what I can only describe as tusks into his nostrils when he entered the venue. Because there’s sort of a Viking-bent to this particular metal scene, I saw a lot of Viking helmets and face paint.

We saw four bands, Ensiferum, the headliner, Turisas, Tyr, and Eluveitie. Eluveitie -- which means "I am The Helvetian" in Helvetic – was easily my favorite. Throughout their set, the Swiss band employed bagpipes, tin and low whistles, an Irish flute, a fiddle, and something called a hurdy gurdy, which is apparently a mechanical violin. I wasn’t expecting such a diverse array of instruments – really just unintelligible screaming – so this was a pleasant surprise. I won’t pretend I could decipher any of the lyrics – granted, not all were in English – but I don’t feel like I missed much for not hearing the words. A stranger remarked I had chosen a “very spiritual metal gig.” Indeed.

Perhaps the highlight of the evening was when I descended into the pit with my friend and his regular metal show companion – an unfailingly polite and hilarious bruiser of a guy. Despite signs posted all over the club admonishing “NO MOSHING,” there were a bunch of younger kids aggressively shoving one another around at the base of the stage. My friend and the bruiser took care to keep me safely ensconced in back, but when they strayed away, I found myself a new protector in a scrawny high school dude who solemnly promised to look out for me, and did.

This brings me to my last point about the whole experience, the vibe of the crowd. I rolled up to this thing looking every bit myself – a rather straight-laced type in a plain black t-shirt jeans and flats. No face paint, no piercings, no tusks, not fooling anyone. No one even looked at me sideways. When my friend told a random stranger and obviously legitimate fan that it was my first metal gig he simply glanced over at me and deadpanned: “no shit.” The entire crowd was unpretentious and totally into the music in a way I’ve never seen before.

I’m not trying to sell you all on metal, remaining unsold myself, but there’s always virtue in trying something different, and this was absolutely one of the more interesting and fun things I’ve done in awhile. On to Heidenfest! In the meantime, back to your regularly scheduled programming…

Want to learn more about metal? Visit the Encyclopaedia Metellum.

Dictated but not read by StarkNY at 11:53 AM