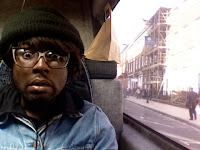 A windswept Saturday night in found Lightspeed Champion fans running for the doors of Union Pool to escape the cold. Upon entering, depending on the time, lead singer Devonte Hynes could be found at the end of the bar in a darkened corner enjoying a beer before his set. Most fans at such a small venue do well to give him his privacy before the show. Adorned with his signature black-framed bug-eyed glasses, a green army-issue shirt and an extremely hot-looking fur hat, Dev (as he refers to himself) disappears from the bar leaving two empty seats, which I proceed to take.

Red-faced fans begin to populate the sold out venue, but are taken back to find the stage empty at 9:00 p.m., when the show was billed to start. Trimmed with gold-leaf carvings, the stage resembles the frame of a renaissance painting— a bar to the right produces the pre-concert drone of those waiting for the show. Yet still, all that can be found on stage is a microphone— no instruments. On a record boasting a wide array of musical sounds produced by guitars, cellos, violins, mandolins, bass, drums and the like, why such an empty stage?

Fans soon find out that Dev is only traveling with violinist, Mike Siddell, and well, the two do not disappoint.

Dev and Mike compliment each other beautifully throughout the set. The two are feeding off one another’s energy, barreling through songs with masterful playing and intense vocals.

Songs that on the album, Falling of the Lavender Bridge, produce emotional bouts of energy and power, do the same in this live performance— remember it is just the two of them on stage. The only low point of the show comes when Dev brings on his childhood friend to join in a tune. The song was about his friends' dog "Molly" and well, let's leave it at that.

The concert is interjected with stories of Dev's recent trip to the Star Wars convention in Philadelphia, which he describes in exuberant child-like detail. His guitar has a Star Wars sticker on the body, a souvenir I guess.

A Stokes cover, a few PBR's and a string of curse-infused bad jokes later and the show is coming to a close. The performance only lasted about an hour, which was expected, but not well received by the fans.

Dev and Mike close the show with the popular favorite "Midnight Surprise" and yes, they played all 9 minutes and 57 seconds worth. It was elegantly done.

The show was a success for Dev. Not many performers can captivate audiences sans a full band playing tracks off the most recent record, verbatim. However, the Oberst- like elegance found in Dev's voice and the expert playing of Siddell, left fans satisfied and sold on Lightspeed Champion.

Next stop for the two is Austin, Tx., for SXSW, and Hynes' even admitted that he was nervous. I guess that makes him human.

Dictated but not read by thestarkonline at 2:33 PM