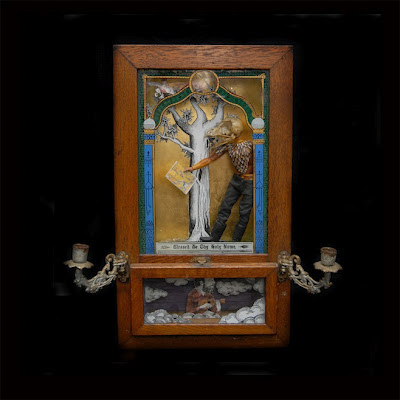 We haven't had music from Jason Molina (of Magnolia Electric Company) since 2009, and for a time, we didn't know if we were going to have new music from him ever again. After a donation campaign to get the singer back on his feet during his struggles with substance abuse, Molina announced in May he would be returning to music. Today, he releases the timely and VERY welcome new mini-album Autumn Bird Songs. Welcome back. Read what I wrote in 2008. Additionally, via Pitchfork:


The songs were written to accompany a book of artwork by William Schaff, titled From Black Sheep Boys to Bill Collectors: The Music-Related Artwork of William Schaff. The book includes writings from the Mountain Goats' John Darnielle and Okkervil River's Will Sheff, as well as album artwork done by Schaff for Songs: Ohia, Okkervil River, Godspeed You! Black Emperor, and more... In related news, in London, the musician Laurie McNamee recently organized a benefit concert for Molina, accompanied by a benefit covers compilation featuring Alasdair Roberts, Jack Hayter of Hefner, and more, that is still for sale at Bandcamp.

Dictated but not read by Starkny at 10:19 AM