Royal Headache: "Down The Lane" 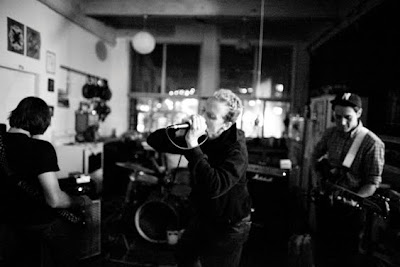 [mp3] Royal Headache: "Down the Lane"
We give Altered Zones a lot of shit - but for every 8 posts on bands you will never hear from again, or care to, there is one really solid act that makes it worth reading. We discovered Gem Club there, as well as Shimmering Stars. Add Sydney's Royal Headache to that list. Royal Headache's song "Down The Lane" (from their forthcoming S/T Sept release) may not just be the best song we've heard on Altered Zones, but maybe the best song we've heard all summer. It's a REAL song. It has a hook, and a melody, structure - holy shit - you'd think it was the second coming "Brown Sugar." Well, that it's not, but it IS just a great pop-punk tune that's refreshing as hell. They'll be in the US around release in Sept. Their album was produced by Mikey Young of Eddy Current Suppression Ring and Straight Arrows' Owen Penglis. Very much looking forward to hearing it all.

Dictated but not read by Starkny at 8:42 AM