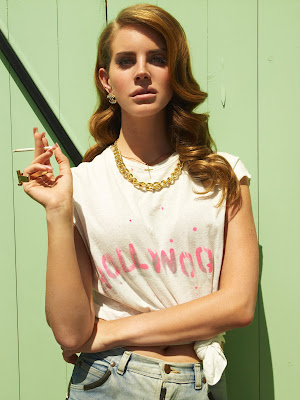 While this post has been brewing for a few weeks now, the internet chatter around this striking new artist is reaching new levels this week. From Facebook posts, to Pitchfork premieres and of course, a Stark post, Lana Del Rey has been everywhere, and deservedly so. While "Video Games" is not necessarily a "Rolling in the Deep" caliber piece of songwriting Del Rey, with her striking looks and atmospheric vocals and arrangements, is able to create an aura around the tune that captures the listener and offers a glimmer at what could be in store down the road from this promising artist. There's a lot going on for this upstate New York native right now, and we feel there is a ton of potential. Let's hope Del Rey is able to continue to grow and develop and not fall victim to the swift, evil, death so many other "buzz" artists have suffered. Remember, it's all in the songs! The excellent "Video Games" will be released with b-side "Blue Jeans" by Stranger Records October 9 via all major digital retailers, and October 10 on limited edition 7" vinyl picture disc.

Dictated but not read by Starkny at 8:00 AM

There are plenty more remixes to review too - so please do have a look at my Soundcloud account!