Gillian Welch: The Harrow & The Harvest 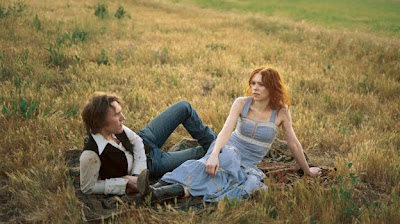 Gillian Welch is one of the most important artists of our generation. It's hard to write about someone like that. Her debut, Revival, was close to perfect. A faded black and white depression era photo, of a naturally beautiful woman in a simple midwestern dress graced the cover. No one really knew who she was. Inside though, that seemingly simple looking woman, with an amazing partner (David Rawlings) and a time-tested producer (T. Bone Burnett, before his recent string of stale material) crafted one of the most subtle and timeless records in the country cannon. Say what you will of "Time (The Revelator)", but "Orphan Girl" is the song that defined the artist.

Welch, released several other albums, including the mildly maligned, Soul Journey in 2003 which in truth contains some fantastic writing, including the stellar "Wayside / Back In Time." Then, she took time off, apparently going through a fairly self-critical period where no songs seemed to be working for her and partner Rawlings. The critical world and the fans we're treated to snippets of Gillian: The David Rawlings' Machine record, and The Decemberists The King is Dead being the most prominent. Yet, everyone wondered aloud as to her new record. Words of encouragement seemed to come from her peers and fans alike, as everyone genuinely wanted this fantastic artist to succeed.

So, today, we have The Harrow and The Harvest. 10 new tracks, spare and rustic, with only 2 tracks eclipsing the 5 minute mark. What's contained within, is still relatively a mystery to this writer. (The label understandingly, was protective of the music, but at some point, you're doing your artist a disservice by not letting a mass of smaller writers contribute to the word of mouth and online buzz behind a record. I know several other larger blogs who didn't have this record either, which is a mistake on the label's part in my opinion.) We're not sore though.

The Harrow and The Harvest (consumed through bad computer speakers via NPR) shows the beginnings of something special. It seems a record more in line with her earlier works Revival and Hell Amoung The Yearlings, than the sprawling Time (The Revelator) or the pop-minded Soul Journey. I've waited a long time for this one, so, until next time, I'm going to sit back and let The Harrow and The Harvest mellow in my ears for a bit. When you only get a record once every 4 years, you don't want to rush things. I certainly won't.
Dictated but not read by Starkny at 7:26 AM

Email ThisBlogThis!Share to TwitterShare to FacebookShare to Pinterest
Labels: gillian welch, harrow and the harvest, NPR