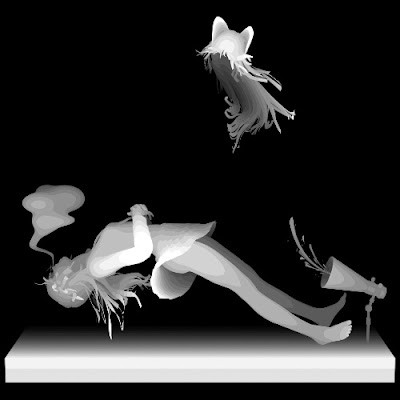 [mp3] Memory Tapes: "Wait in the Dark"
Certainly late on this one in terms of the blog world's schedule, but really, when has that ever stopped us? The truly talented "buzz" artists, persevere and create new music that equals or surpasses the quality of the previous content that brought them such notoriety in the first place. Such is the case with Memory Tapes (Philadelphia's Dayve Hawk). While it would've been easy to fall by the wayside alongside of countless other buzz-band victims, Memory Tapes have delivered "Wait in the Dark" an excellent new track from their upcoming album 'Player Piano' due July 5. The track is imbued with everything we liked about Memory Tapes in the first place (rhythmic melodies, tastefully delivered vocal effects) yet, shows a maturity in not only sound fidelity, but in songwriting. Memory Tapes (if the whole record stands up) are poised to reward their early supporters for their patience, and to garner hordes of fans who never jumped on the bandwagon in the beginning. Mp3 Via.

Dictated but not read by Starkny at 7:30 AM

I saw here http://www.ourstage.com/blog/2011/5/15/the-beat-generation-chillwave-redux that memory tapes was coming out with a new record but this is the first I've heard from it. thanks for putting this up duder