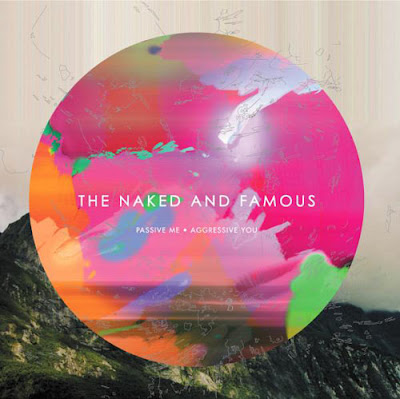 The Naked and Famous - Passive Me, Agressive You (March 15 / Universal/Republic Records)
The Naked & Famous "Young Blood" by OnTheRecord

Don't compare Auckland, New Zealand natives, The Naked and Famous, to Passion Pit, MGMT or any of the like. It doesn't work that way. Ask producer and fellow-band helmsman, Aaron Short, who we had a chance to catch up with via email.

"We always find the Passion Pit and MGMT reference an interesting one. I think most people find, as soon as they hear the album and dig further than the singles, that these comparisons disappear as songs head deeper in to different areas of our tastes. One listen to "Jilted Lovers" should sort you out," said Short.

Comparisons aside, The Naked and Famous are at the forefront of an interesting international electro-pop music movement percolating in the US. Their massive debut record, Passive Me, Aggressive You drops on March 15th in the States on Universal/Republic Records.

Short is one of five band members joined at the front by signer, co-producer and co-founder Thom Powers, singer and co-founder, Alisa Xayalith, bassist David Beadle and drummer Jesse Wood. Each of the five members in the band brings a different musical element to the table. Passive Me, Aggressive You is an eclectic mix of music genres, from fuzzed-out metal-rock, to electro-pop, to introspective, pseudo-ballads.

"We draw from a large amount of influences when making music," Short said. "I for example was completely absorbed in electronic music and collecting house records while Thom was growing up playing in metal bands. This dynamic we all have between us is what then results in the strong contrasts we have in all our music."

The band's debut single, "Young Blood" follows the guidelines of Short's more electro-friendly song constructions. With an infectious melody, an ear-worm of a chorus and a huge sound driven by vamped-up electric guitars, gang-vocals and 80s-influcened synth lines, it is ultimately Xayalith's angelically-indie-leaning voice that anchors the song. Check out their beautifully-crafted video for "Young Blood" below, directed by Joe Kefali and Campbell Hooper:

Read more from our interview with Aaron Short, see the video for smash-hit "Punching in a Dream," and check out their upcoming US and Canadian tour dates after the jump!


"Pretty much all the tracks on Passive Me, Aggressive You were written during 2009 and 2010. Some tracks came together much faster than others for us. "Young Blood" is a great example of that. That track was possibly one of the fastest written songs on the album, as well as being the first track off the album we recorded. You can then compare that to "All Of This," which was actually written in demo form during the last phase of us creating our first 2 EPs," Short said.

"Punching in a Dream," one of the strongest songs on the record, lays at track number two and is a clear example of what's to come.

While it is clear that certain songs on their debut record standout as "key-note tracks," or "singles," it is easily recognized that the band set out to make a strong, cohesive album with a distinct start and finish. That is exactly what you get with Passive Me; it is a listeners record, something one needs to live with, spend some time with, and as Short said, dig through its layered intricacies. At the core, this record bounds and leaps, paced perfectly to achieve the "journey" Short describes below.

"We're all huge fans of full albums and the journey they can take you on, compared to the 'quick hit' style of late where people download one single and that's it... they've had their fix. One of the perks of constructing an album that way is the fact that you CAN go from melodic-pop through to ambient distortion, rather than an album of the same noises on repeat," says Short.

It is evident that The Naked and Famous have successfully landed in the US. Relating to the international-music movement mentioned earlier, this band joins the likes of Kids of 88, Bag Raiders, Icona Pop and more that are revolutionizing the US indie-music scene; managing to successfully toe the line between the indie and mainstream, the above bands are finding success in doing what they are good at -- luckily for them, they are coming about at a time when the pop, electro and indie-genres are merging. The result: a mainstream beast that manages to avoid the mainstream machine -- a machine that tends to leave a sour taste on the tongue of many tastemaking websites, music festivals and publications.

"I got the shivers in an interview the other day when I was asked what song we would pull out on stage if we felt the people watching us weren't enjoying what they saw," Short said. "I think me getting annoyed at a question like that is a great example of all the things we aren't about."

Email ThisBlogThis!Share to TwitterShare to FacebookShare to Pinterest
Labels: New Zealand, Passive Me Aggressive You, Punching in a Dream, The Naked and Famous, Young Blood

Nice blog, hi there, i found that there is one website offering free puzzle games. Just take one minute to sign up then you will receive one free puzzle game. I've done it and now i am enjoying it. Would you like one? Enter the below URL to get one:http://www.684899.com/en/CosmicCreature/project_1.htm