Karp's "Top Something of Whatever Year It Was" 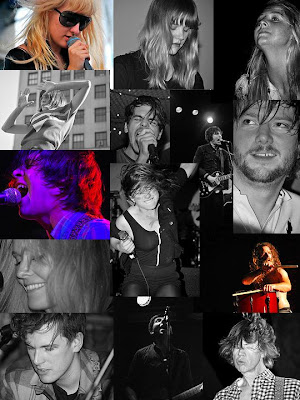 Get excited loyal Stark enthusiasts, I am more than just a pretty camera (these are the lies I'm fed to keep me compliant). This list was near impossible and it's not really what I expected, but according to my iTunes "plays" this is it. So without further adieu and in no particular order, a wistful whimsical list of what I’ve listened to over and over and over…

"Awake My Soul" - Mumford & Sons - Sigh No More
Negative 2 points America for the beyond overdue '10 release. The raw grit of Marcus Mumford's voice? The lonely heart-wrenching guitar plucks? The power of a quiet build into a massive 3000 person sing along at T5? I can't even explain the feeling, but in the immortal words of my FB status update "Shit just got EPIC". Also "White Blank Page" pretty much changed my life.

"The Mermaid Parade" - Phosphorescent - Here's to Taking it Easy
This song is sad and sort of right on the mark, which is why it’s been my go to for my weekly (daily) bottle of wine alone time.
"Madder Red" - Yeasayer - Odd Blood
Listened to 7 more times than "O.N.E."... so it won.

"Liv Tyler" - Roadside Graves - You Won't Be Happy With Me

"Save Yourself, I'll Hold Them Back" - My Chemical Romance - Danger Days... this tile is too long
You SO know this list would never be allowed to exist without the boys who soundtracked my dark deeds of '02 (and '03,'04,'05... how about just '02-present?). All their albums are stand-alone works of art and while this one stays true to the boys I love, it's certainly more colorful. What can I say?... I only mostly shoot in b&w...

THIS. WHOLE. ALBUM. - Lissie - Catching a Tiger
That is all.

"Sprawl II (Mountains Beyond Mountains)" - Arcade Fire - The Suburbs
My mom calls them "Arctic Fire" and they are her new favorite band of EVER ... welcome to the mainstream folks!

"Love the Way You Lie" - Eminem (ft. Rihanna) - Recovery
I am a huge sucker for a pop ballad, especially when it's about an angsty, doomed, mildly violent relationship with a video featuring fire and the sweaty, tattooed hotness that is Dominic Monaghan (seriously, watch it).

MORE AFTER THE JUMP! "Hello Love" / "Talking Too Loud" - The Young Things - ...Is the Killer
Having these boys on my list is probably on par with some Martha insider trading shit, BUT I do seriously enjoy their music. I dare you to come to a show and not love them... if you're extra nice they may even let you drink the communal Evan Williams.

“Conversation 16” - The National - High Violet
I like Zombies. This song is not actually about zombies but it may be an accurate profile of my thoughts... also, I like the part where he says "cause I'm evil"... cause I'm evil.

"Bed Intruder Song" - Antoine Dodson (& The Gregory Brothers)
Shhh, don't even pretend you don't know at least some of the words to this song. T-Pain couldn't make this shit up if he tried... wweellll, obviously.

“Comfortable” - Greg Thomas – Atlantic/Pacific
My Thomas made an album! And it’s AWESOME! Awesome in a lonely, late night, melancholy train ride, whilst ruminating on your lost childhood/love/bunny… kind of way.

"Blah, Blah, Blah" - Ke$ha - Animal
Ke$ha is a trashy, boozy, dirty white girl who enjoys glitter... after a fourloko I can sort of totally relate and will happily perform this song for your parents, just ask my mother.

"Like a G6" - Far East Movement - I don't actually care
Forgot to remember the album name when I googled the artist... cause I know the words but I actually had no idea who was responsible for this... um... "song".

"River of Brakelights" - Julian Casablancas - Phrazes for the Young
Preface: I always read the last page of a book first so mea culpa...

Much like my love of the Traveling Wilburys began my appreciation for Dylan*, this brills solo Julian album/tour/video extravaganza helped cultivate my love of the Strokes. If you ever want me to belt out a song whilst falling to my knees in pained ecstasy... this song works every time... yes, there are photos...**

*Epilogue: YES MATT, I KNOW... I know... but I was in high school and too busy learning the dance to "Hit Me Baby One More Time"... as a consolation prize I knew every Roy Orbison song by age 7...

I could keep on going but I had some nyquil and words are getting harder to remember, so... bait and switch... I’ve made you two "Rest of the Best of '10" collages!

xoxo Karp via the #WitchHouse

Dictated but not read by StarkNY at 7:03 AM

Email ThisBlogThis!Share to TwitterShare to FacebookShare to Pinterest
Labels: karp, Top Something of Whatever Year it was