Frankie Rose and the Outs 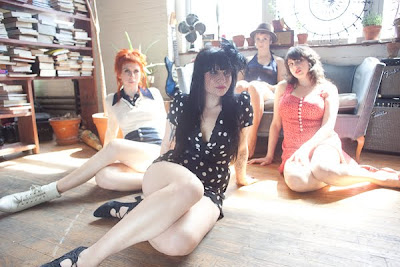 [mp3] Frankie Rose and The Outs: "Little Brown Haired Girls"
We've been listening to a lot of The Ronettes around here of late, and it comes as no surprise that there are a veritable bevy of girl groups out there right now, not only referencing that seemingly ageless Phil Spector production quality in their press releases, but striving to copy it in their own music. Usually we take a quick listen and pass it off as another imitation. But, like the enigmatic sounds of the excellent collective Gigi, Frankie Rose and The Outs channel this oft-copied sound in a way that's tasteful, and at the same time origional. Many of Rose's previous groups ie. The Vivian Girls, have caught a lot of flack on this site for their pretentious lo fi for lo fi's sake recordings. Yet, there seems to be a different mindset at play with Roses' newest incarnation that comes from a more pure place, laced with true harmonies and a dialed-down reliance on the reverb effect. Frankie Rose and The Outs' self titled album comes out 9/24 on Slumberland.

Dictated but not read by StarkNY at 7:45 AM